Caution: The documentation you are viewing is for an older version of Zend Framework.
You can find the documentation of the current version at:
https://docs.zendframework.com/zend-json/

When encoding PHP objects as JSON, all public properties of that object will be encoded in a JSON object.

JSON does not allow object references, so care should be taken not to encode objects with recursive references. If you have issues with recursion, Zend\Json\Json::encode() and Zend\Json\Encoder::encode() allow an optional second parameter to check for recursion; if an object is serialized twice, an exception will be thrown.

Decoding JSON objects poses an additional difficulty, however, since JavaScript objects correspond most closely to PHP‘s associative array. Some suggest that a class identifier should be passed, and an object instance of that class should be created and populated with the key/value pairs of the JSON object; others feel this could pose a substantial security risk.

By default, Zend\Json\Json will decode JSON objects as stdClass objects. However, if you desire an associative array returned, you can specify this:

Any objects thus decoded are returned as associative arrays with keys and values corresponding to the key/value pairs in the JSON notation.

The recommendation of Zend Framework is that the individual developer should decide how to decode JSON objects. If an object of a specified type should be created, it can be created in the developer code and populated with the values decoded using Zend\Json.

If you are encoding PHP objects by default the encoding mechanism can only access public properties of these objects. When a method toJson() is implemented on an object to encode, Zend\Json\Json calls this method and expects the object to return a JSON representation of its internal state.

Zend\Json\Json can encode PHP objects recursively but does not do so by default. This can be enabled by passing true as a second argument to Zend\Json\Json::encode().

When doing recursive encoding of objects, as JSON does not support cycles, an Zend\Json\Exception\RecursionException will be thrown. If you wish, you can silence these exceptions by passing the silenceCyclicalExceptions option:

Zend\Json has two different modes depending if ext/json is enabled in your PHP installation or not. If ext/json is installed by default json_encode() and json_decode() functions are used for encoding and decoding JSON. If ext/json is not installed a Zend Framework implementation in PHP code is used for en-/decoding. This is considerably slower than using the PHP extension, but behaves exactly the same.

Still sometimes you might want to use the internal encoder/decoder even if you have ext/json installed. You can achieve this by calling:

JavaScript makes heavy use of anonymous function callbacks, which can be saved within JSON object variables. Still they only work if not returned inside double quotes, which Zend\Json naturally does. With the Expression support for Zend\Json support you can encode JSON objects with valid JavaScript callbacks. This works for both json_encode() or the internal encoder.

A JavaScript callback is represented using the Zend\Json\Expr object. It implements the value object pattern and is immutable. You can set the JavaScript expression as the first constructor argument. By default Zend\Json\Json::encode does not encode JavaScript callbacks, you have to pass the option enableJsonExprFinder and set it to TRUE into the encode function. If enabled the expression support works for all nested expressions in large object structures. A usage example would look like: 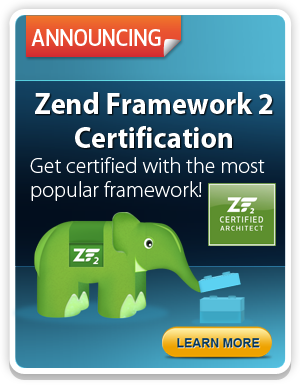